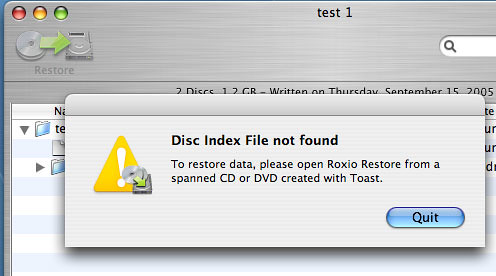 So, I recently bought Toast 7, and it arrived yesterday. The only new feature that I really care anything about is the CD spanning, which would allow me to backup some of my projects that have single files that are larger than will fit on one CD or DVD.

Well, guess what… it doesn’t appear to work all that well, or at all. I did a little test and burned one large file across two CDs and everything appeared to be OK, until I tried to restore it.

The way it works is, Toast burns a small app called “Roxio Restore.app” onto the CDs/DVDs that have the spanned files. You are supposed to be able to click on that app, on any of the spanned CDs, and restore anything from any of the discs… without having Toast installed. Well, when I click Roxio Restore.app, I only see a message that says “Disc Index File not found”, and I’m forced to quit. WTF! Roxio Restore doesn’t seem to recognize its own CDs.

I can’t find any mention of the problem on the Roxio support site, which totally sucks by the way. Has anyone else out there had this problem?

UPDATED (12.20.05): Roxio just released the Toast 7.0.2 update. It supposedly addresses the disc spanning issues, along with numerous other bug fixes. I haven’t tried it yet though.