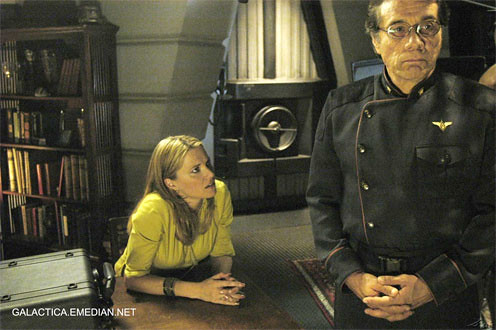 She’s back… She’s blonde… and she’s on Battlestar Galactica.

That’s right, Lucy Lawless, better known as Xena: Warrior Princess, has joined the cast of Battlestar Galactica. And… she’s got a big secret.

I have to admit, I haven’t been watching the show much. It’s on Friday nights, and that’s not usually a night I watch much TV. I’m too lazy to tape it, but I try to catch the repeats late at night during the week.

If you haven’t seen the new Battlestar Galactica, you should check it out. It’s actually a pretty good show. As a designer, I really like the look they have developed with the space scenes. Using a unique style of pan and zoom, they’ve developed a cool sense of motion and scale.

5 thoughts on “Xena in Space”