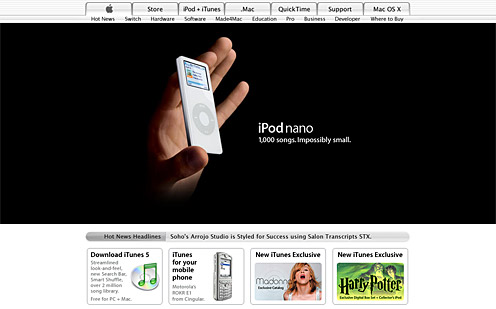 Well, if you’ve been holding your breath all morning waiting for the new announcements, you can breath again. As usual, the wild speculation far over-shot what was actually being introduced. There was no way Apple could live up to all the hype that has been building up to this event.

Basically, we have a new Motorola phone that has a mobile version of iTunes on it, but other than that it’s just a plain old phone. There was no new video iPod, but Apple did ditch the iPod mini, in favor of the new iPodnano. Which, in all fairness to Apple is a pretty sweet little device, it just doesn’t play video. iTunes 5 was also introduced, but it isn’t that different than iTunes 4.9. It’s just been refined a little. Lastly, there is some new music content available on the iTunes store, mainly Madonna, which has been previously unavailable.

UPDATE: Apple has posted a video of the event

Personally, I didn’t really believe that we would be getting a video iPod, but I did have high hopes for the phone. That was my big disappointment from this morning. I don’t really have any interest in a phone that just has iTunes on it. I wanted more of an Apple OS.

I am actually in need of a new cell phone. I held out in hopes of a better announcement today. But I think I’ll just go buy the Motorola Black RAZR

. Through the end-of-day today, Amazon has them for FREE, after mail-in-rebates of course.