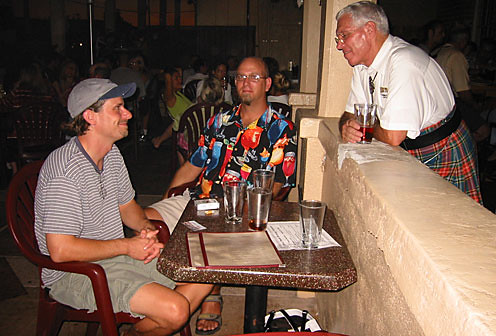 One of my all time favorite places in the world is Four Peaks Brewery, in Tempe, Arizona. I’ve been going there for years and years. I haven’t found a suitable replacement here in San Francisco since I moved.

I just read a disturbing article over at tian.cc, that says Four Peaks now has valet parking. In all fairness to Four Peaks, they did have a pretty bad parking problem, but that doesn’t mean I wanted them to turn the hidden ‘locals-only’ parking in the back alley into a paid valet lot. Four Peaks just isn’t a valet kind of place.

Oh well… I guess these things happen. By the way, that’s me in the middle. On the left is my friend that I just went camping with. On the right is ‘The Kiltlifter’, he’s part owner of the brewery and was the namesake for my favorite beer at Four Peaks.