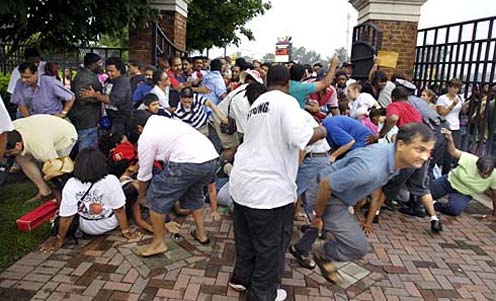 If you hadn’t already heard about this, the Henrico County (Richmond, VA) Public School system was clearing out roughly 1,000 four year old iBooks. They were giving residents a chance to buy them for a mere $50/ea.

Well, the sale started this morning, and in a disgusting show of greed, approximately 12,000 Henrico County citizens nearly trampled each other to death trying to get to those precious iBooks. You people should be ashamed of yourselves.

Update: These are quotes from a CNN article. I had to add them in, because they are so incredibly insane, I couldn’t believe it. What the hell is wrong with these people?

“Blandine Alexander, 33, said one woman standing in front of her was so desperate to retain her place in line that she urinated on herself.”

Jesse Sandler said he was one of the people pushing forward, using a folding chair he had brought with him to beat back people who tried to cut in front of him… “I took my chair here and I threw it over my shoulder and I went, ‘Bam,”‘ the 20-year-old said nonchalantly, his eyes glued to the screen of his new iBook, as he tapped away on the keyboard at a testing station.

3 thoughts on “$50 iBooks cause stampede”