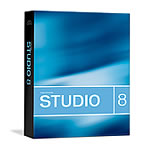 This morning Macromedia announced Studio 8, the next major upgrade to it’s web-authoring package. In a not so surprising move, Freehand is missing from the package. In it’s place Macromedia has included Contribute 3. They’ve also dropped the MX from the name.

Since Adobe bought Macromedia, people have asked me what package should they go with (Dreamweaver or GoLive). I think it’s a given that one of them will be going away. At this point I would say it’s a toss-up thought. Adobe just announced GoLive CS2 last month. With the announcement today of Dreamweaver 8, I think it’s going to be at least a year, possibly two before we see the products merged by Adobe. I would say stick with what you are used to, and wait it out like the rest of us.

MacCentral has some great articles covering the new products…