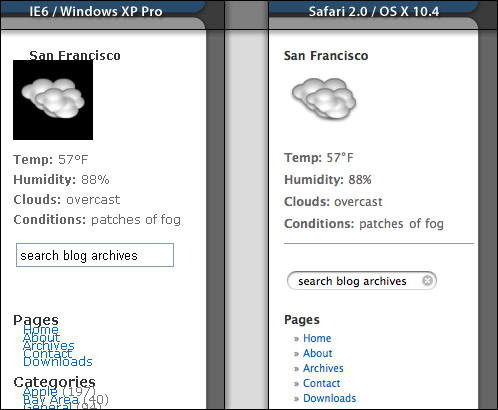 So, it’s been a while since I’ve tested this site in Internet Explorer on a PC. This morning, thanks to a tip from a friend, I found out that I do have some anomalies.

The header and footer images are slightly off from the body of the page. That’s not too big of a deal, I could live with that. The real problems are in the sidebar. The image on the left is how the sidebar looks in IE6 under Windows XP Pro. The image on the right is how it looks under Safari 2.0 under Apple OS X 10.4. Notice a difference?

The weather icon is a png file with an alpha channel. I totally forgot that IE doesn’t really display png w/ alphas very well. Why, I do not know. You would think Microsoft would be able to do that by now, png’s aren’t exactly a new thing.

Next, the spacing between the menu items is obviously a little off in IE. Why, I don’t know that either. It seems to display properly in every other browser, on both platforms. I think it stems from Microsoft’s inability to conform to CSS standards. I know that’s why the dividing line between the weather information and the search field is missing in IE.

Lastly,Why oh why can’t Microsoft make IE anti-alias the text on a web page (make text look smoother)? IE on the Mac was able to do this… Maybe it’s a general shortcoming of the Windows Operating System?

All this leads me to one question… Why does Internet Explorer suck so bad?

If your on a PC, and you’re using Internet Explorer… please STOP! There are much better browsers out there, like Firefox, or Mozilla. They will improve your web-viewing experience. Better yet, just switch to a mac. All your friends are doing it.

Thanks for the heads up Todd.

UPDATE (a little while later): OK, I replaced the png files with jpegs, and I fixed the spacing between menu items. There’s still some spacing issues, but at least it’s presentable now. Damn IE!

13 thoughts on “Why does Internet Explorer SUCK so bad?!?”