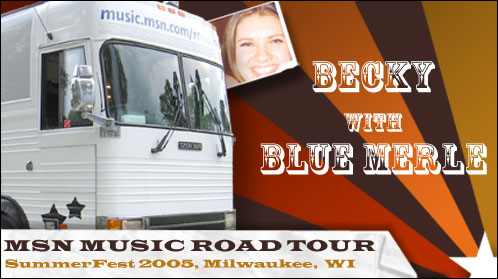 I’m in the process of doing some video editing for the MSN Music Road Tour. The idea of the tour is to put six people on a bus, set them up with blogs and video cameras, and send them to various music festivals to interview the bands. A colleague of mine here in San Francisco was working on the project and he needed some help with the video end of things. It’s kind of cool adding a big name to my client list, but the project itself is nothing too special. They didn’t want to spend a lot on this portion of the project, so it’s really rough-cut video. I was basically just cutting out the junk. The only cool thing I got to do was add a little intro animation. It was designed to go with the existing style of the site. I’ve completed six of the movies, they’ll probably be 20-25 when we’re done.