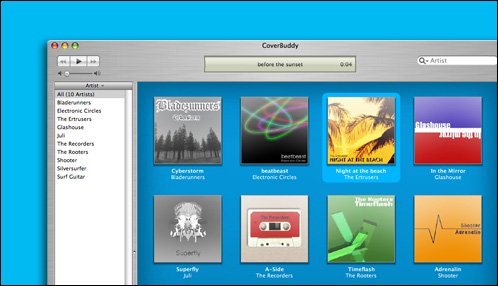 Update (6.21.05): This software is $24.95. I personally think that is a bit steep, I would have expected this to be in the $10-$15 range. But, I went ahead and shelled out the cash for it. I wanted this feature, and I thnk people who make something that fills a need should be rewarded. Even though, realistically, it’s only a matter of time before this feature is integrated into iTunes.

On the plus side, this software has pointed out some bad info in my ID3 tags… wrong artwork, compliation settings, etc… So that was a good thing.

Update (6.29.05): The 1.1b8 release of CoverBuddy has fixed the Airport Express bug. It also fixed a bug I was having with artist names in lower-case being put at the bottom of the list, instead of alphabetical order.