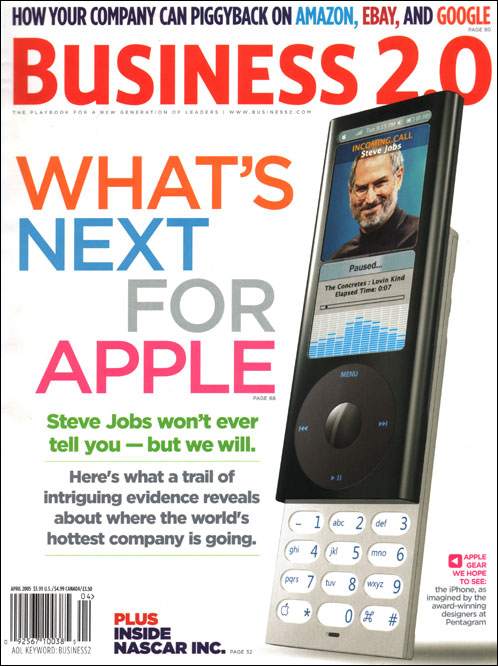 Where’s my Apple Phone? One thing that was not announced at today’s WWDC keynote was some sort of Apple phone, or even the Motorola iTunes Phone. Rumors have been running rampant about these two items.

The image above is the cover from the April-05 issue of Business 2.0. It was basically a story of what the writer would like to see Apple develop.

I had actually kind of given up on the Apple phone, but during a conversation with a friend the other day, it occurred to me that Apple could actually make a phone, in an effort to make it’s own iPod killer. I think we’ll all agree that an iPod killer is only a matter of time, good things can’t last forever. With cell phones gaining more and more memory and functionality, it’s a reasonable bet that some sort of phone may just do the trick. Apple could be thinking this as well, and may feel compelled to develop that phone themselves, to essentially beat others to the punch.

Oh well, I guess I’ll just have to wait a little longer.