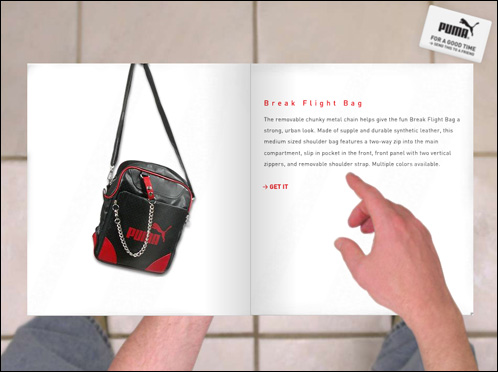 I found this awesome Flash piece for the Puma eCatalog. You use your hand to grab and turn the pages. Some of the pages have other interactivity in them also. They did a great job with it. 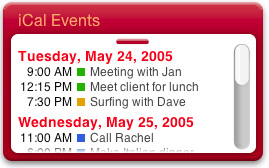 I came across this great little widget that interacts with Apple’s iCal, appropiately called iCal Events. Here’s a description from the developer…

“Face the day! Always know what’s next in your schedule using iCal Events. iCal Events displays upcoming events from multiple calendars in a simple, beautiful widget for Dashboard. You can see up to two weeks of upcoming events in the same widget.

On the widget’s reverse side, you can choose which calendars to view using iCal-style colored checkboxes. You can also choose how many days of upcoming events to display in the widget.” 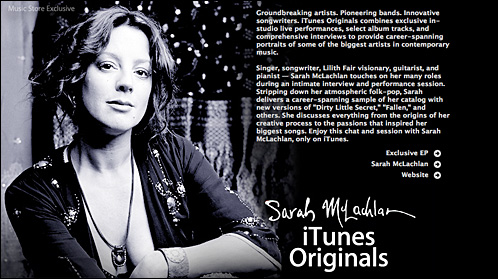 Sarah McLachlan has released a new album exclusive to iTunes. The album contains some classic tracks, and some new versions of some of her other songs. It also has commentary from Sarah about her music.

“So palmOne appears to be stealing Prince’s moves on this and will now be shedding the palmOne moniker in favor of a return to a simpler, long-ago time in which they were still just Palm. They’re forking over $30 million to buy out PalmSource’s 55 percent share of the Palm Trademark Holding Company, to be paid out over 3.5 years. PalmSource will retain rights to the PalmSource name and concurrently develop a new brand identity over the next four years (they’re gonna be busy). Palm, nee palmOne nee Palm, will be getting a new logo and design treatment, and all products launched from this fall onward will be branded under the monikor Palm. They’ve also renewed the Palm OS license from PalmSource until 2009, so will continue to develop and market mobile devices based on the Palm OS.”

A friend sent me this article this morning…

“Apple Computer has been in talks that could lead to a decision soon to use Intel chips in its Macintosh line, according to a report published Monday.

The Wall Street Journal, citing two industry executives with knowledge of recent discussions between the companies, reported that Apple will agree to use Intel chips.”

UPDATE: I came across this article over at the Cult of Mac. I guess we’ll see who’s right.

“The rumor that Apple is considering Intel chips for the Mac platform is nonsense. Literally. Non-sense. It makes no sense. The rumor that Apple will use chips from Intel instead of its long-standing partner IBM is as old as the Mac platform itself. Year after year the rumor keeps popping up. Today’s version is in the Wall Street Journal, which means it’s getting wide play. “The computer maker has been in talks that could lead to a decision soon to use Intel Corp. chips in its Macintosh computer line, industry executives say, a prospect that may shake up the world of computers and software,”the WSJ reports. But why would Apple switch from IBM, which is kicking ass, to Intel, whose heyday may be over? Intel’s chip technology trails both IBM’s and AMD’s. IBM’s dual-core processors are a couple of years ahead of Intel’s, which is why all three next-generation gaming consoles will be based on variations of the IBM’s PowerPC chips — the same chips used by Apple. The irony is, it’s Microsoft that’s starting to switch platforms, starting with the XBox. Not Apple.”

“In response to the threat of malicious widgets that automatically install themselves when you visit a website, ‘Widget, The World Watcher‘ has been released to tame all widget downloads. Rather than completely disabling Safari’s handy automatic file opening feature, this free program asks for permission before installing a widget you’ve downloaded. You can choose to install it, delete it, or move it to your desktop for later analysis.

And of course, “if a widget is found attempting eco-villainy, Widget, The World Watcher will fly in from space and go to work saving the day with the aid of Kristine, Brian and Kevin.” Gotta love free programs…”

“Downtown Software House this week released Widget Manager, a preference pane for Mac OS X 10.4 “Tiger” that allows you to manage and delete Dashboard Widgets. Rather than browsing to your ~/Library/Widgets folder, Widget Manager provides you with a simple interface for disabling widgets so that they don’t load when you press F12 or removing them altogether. This is a very valuable feature if you need to remove a malicious widget that doesn’t want to be removed. The program also displays widget version numbers so you can quickly check if you are up-to-date.”

A while back I came across the site for Oral Fixation Mints. I’ve never actually had the mints, but I love the tins they come in. Yes, I’m a design geek. If you read through their site, or the Oral Fixation Blog you’ll get the idea that they really enjoy making mints. That’s so cool. I’ll have to get me some of these.

Do you use PDF Xtra for Macromedia Director? Good News… Integration New Media has just announced version 7. It has various new features, the biggest being that it is now compatible with Adobe Acrobat / Reader 7.0! This is really good news for me, as I have clients that have been waiting for this. Very Cool!