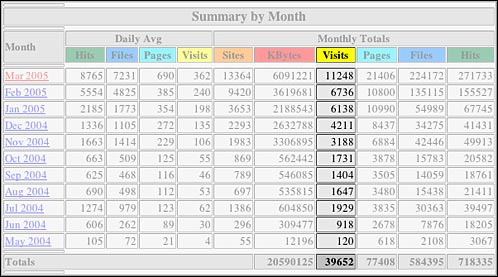 In March, the number of unique visitors to this site almost doubled. That is so awesome! I’ve seen a significant rise in just the last week. I usually get between 250-300 visits a day, but for the past week or so I have been getting 650-750 visits per day. I thought this was really odd at first, but I think I figured out what happened. About a week ago I turned on a feature of my host, called “hotlink protection”, it blocks people from displaying images / movies from my server on their site. For example… someone builds a page with a story about an iMac, that has an associated image, but instead of hosting the image themselves they pull the image from my server. This is bad because they are using my bandwidth, instead of their own. With hotlink protection turned on, if someone tries to display media from my server on their page, they just get redirected to my home page. I have a sneaky suspicion that at least a few people had been drawing from my server, since I tend to use a fair amount of images and movies in my site. I’m willing to bet that the desktop pictures on my downloads page were linked to the most. Some of them have been downloaded a lot in past months.