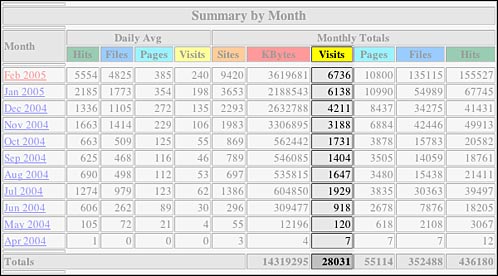 Wow! I’ve had another record month. With only a couple exceptions, the number of people viewing this site has steadily grown since the day I started it. That’s so cool! I’m glad people seem to like it enough to come back.

I’m also pretty surprised that my original (4 panel) iPod people desktop picture was downloaded a whopping 2,731 times in February. I think that’s pretty cool! The other two items to generate the most traffic were, the topples pic of BloodRayne from the October issue of Playboy, and the Conan Obrian video segment, spoofing a trip to the NBC call-center (in India) to meet the tech support people.