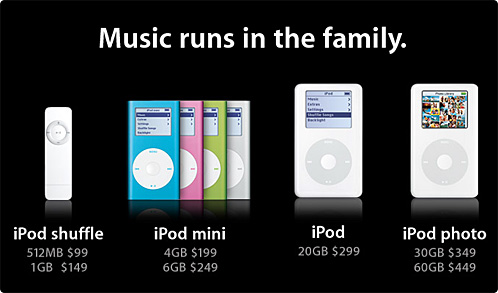 As expected, Apple introduced an updated line of iPods today, and as usual the announcement did not include most of the rumors that were running rampid.

What they did NOT do:
* Mini’s did not get a color screen
* No bluetooth
* Standard iPod is still white, no colors introduced

Apple also made a few other changes in what you get standard (in the box), like doc connectors, etc…. Overall a slightly disappointing announcement. But in all fairness to Aplle, their announcements could never live up to all the hype and rumors that precede any announcement.

The memory reader attachment isn’t available as of the time of this posting, but I am curious to see it. Third party readers available now only allow you to use the iPod for storage, you can’t view the pictures until you sync with your computer. The Apple version will allow you to view the images immediately after transfer.