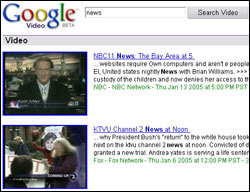 Google takes on video:
“Never ones to make a big stink of what’s next (yeah, right), Google’s gone and released under the radar their latest in their never ending string of forever-in-beta services, Google Video. The premise: there’s a lot of information on TV that’s just passing into the ether; Google, being in the biz of indexing (and commoditizing) all information in the world ever period, did something so simple and sensible we’re surprised it’s never been done before: set up a bunch of machines to capture and index all the closed captioning data on the line (and grab a few screen shots along the way for context). Boom, instant full-TV index. And what’s more, they’re making vague allusions to a future feature upgrade to just let you just watch the thing. Google, we’re very impressed. Scared, and impressed.”