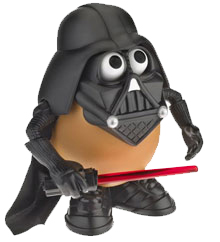 PAWTUCKET, Rhode Island (AP) — A spud on the dark side.

The toy spud will be available next month, ahead of the May release of “Star Wars: Episode III — Revenge of the Sith,” the latest installment in that film series.

Darth Tater will come with a light saber, cape and helmet, in addition to the regular Mr. Potato Head accessories such as eyes, mouth and nose.

The Pawtucket-based toy maker says children will be able to “have all kinds of mix n’ match, Mr. Potato Head fun with this wacky spud dressed as the infamous `Star Wars’ villain, Darth Vader.”

The toy will retail in the United States for $7.99.

Thanks to Todd for sending this to me.