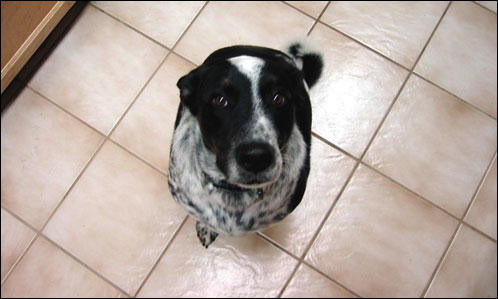 We have one sick doggie on our hands. We’ve made eight nine emergency trips outside so far today (starting at 3:00am). We live on the 7th floor, so it’s not easy getting Emmitt (the dog) outside quickly. In addition, he’s had two four accidents on the patio, and thrown-up twice four times on the patio and twice three times in the living room. He’s pretty empty now. He won’t eat anything, not even his favorite treats.

He finds things on the street to eat when we go on walks. I’m hoping he just ate something bad, and will get over this today. If not, we’ll have to go to the vet tomorrow. We had to make a doggie emergency room visit at 1:00am. The brown goo turned to blood, and was coming very frequently. They examined him and gave him blood-work…. $387 later, the vet says he probably ate sometihng bad on the street. I knew that. I’m glad we went though. The vet did give him antibiotics, and they injected water under his skin to re-hydrate him, he was very dehydrated from losing all his fluids out one end or the other. I’ve never seen a vet do this. It made Emmitt look all puffy. He was actually leaking a bit of water out various parts of his skin. He seems to being doing OK now. The vomiting and diarrhea seem to have stopped. We have a regiment of pills to give him over the next week, and we have to gradually reintroduce him to food and water.

UPDATE: It’s been a few days, and Emmitt seems like he is back to normal. No more blood squirts, and he’s back on his regular food. I’d like to think this tought him a lesson about eating things he finds on the street, but I know that just isn’t true.

4 thoughts on “One Sick Doggie”