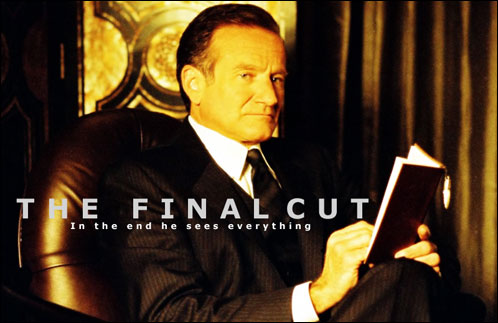 Over the weekend we saw The Final Cut, staring Robin Williams, Mira Sorvno, and Jim Caviezel. It was pretty good. I would actually recommend it. If you see it, you should be in the mood for a fairly slow movie though.

The premise:
“A Zoe Chip is placed in your brain at birth to record your entire life. When you die, the footage from you life is edited into a “Rememory” – A film shown at your funeral pieced together by an editor…” visit the site for the complete description

Overall I liked The Final Cut, but I think they could have done a few things better. I would have liked more information on how the Zoe implant program was started. And although I think I understand why they introduced Maira Sorvino’s character, I think maybe something may have been lost on the cutting room floor. She doesn’t really need to be in the film, at least not in the way it was edited. I would have liked to have seen more background there too.

The film did lose marks for visual quality. As we watched the movie, I could see digital artifacts, and slight compression. I started to assume that maybe this film had been shot on video. I found out later that the film is being presented digitally, using AMC’s proprietary Digital Theatre Distribution System (DTDS). The digital file of the movie is distributed to AMC theatre locations via satellite. Although I like the idea of this kind of distribution, I think the quality leaves a little to be desired.

Overall, I give The Final Cut a thumbs up.

1 thought on “The Final Cut”