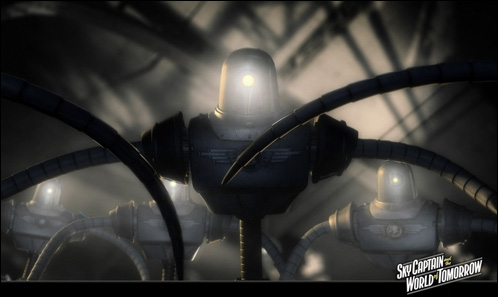 Tonight we saw Sky Captian and the World of Tomorrow. I am going to give something away in my review, so if you don’t want to know to much about the movie, you should stop reading now.

I’m giving Sky Captian 3.5 stars for visuals only. They were excellent. I thought they accurately captured the design of the 40’s. The film is very impressive looking. It’s worth seeing just for that. The story on the other hand is quite bad, and never really captured my interest. It was missing one very crucial element… there is no villian. We are lead to believe the existance of a villian named “Totenkopf”, but it turns out that he died 20 years before the start of the film. The evil doings are being carried out by an automated system he left running. So we, the audience, never really have anyone to root against. I think this film broke the cardinal rule of 40’s serials. There should have been an evil mastermind, plotting to take over the earth, who discloses his entire plan the Sky Captian… thinking he could never thwart his evil plans.

Other story oddities include…

1. Our heros visit the mythical valley of Shangri-La (eden), home of magical beings. Nothing happens there except they find an abandoned mine.

2. They drive by an ancient underwater city (presumably Atlantis), but they don’t even notice.

3. The end up on an island with home-made dinosaurs, but there is no explination as to why they (the dinos) are there.

On a side-note, I think the trailer is also a little misleading in that Angelina Jolie is only in the movie for about 5 minutes. She doesn’t really have much of a role. I never really got into this movie. If it wasn’t for the visuals, it would have been entirely waisted time.

1 thought on “Sky Captian and the World of Tomorrow”