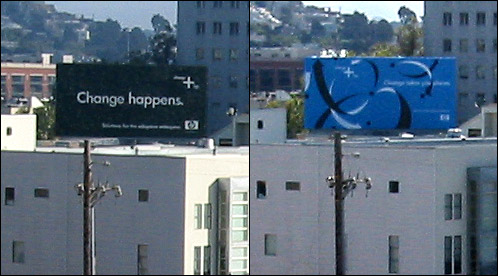 Outside our window there is a billboard by HP. It was originally black, with colored arrows going from left-to-right (straight lines), with the slogan “Change Happens”. Over the last several months they have gradually covered it with fake vines. I was assuming that they would at some point uncover the billboard to reveal a new sign. They did that last night. The billboard is now bright blue, with arrows going every-wich-way, with a new slogan “Change takes you places”. The picture on the left (above) is when the sign was covered with vines, I don’t have any of the original. It was a very cool idea, but the end result is a little dissapointing considering the legnth of time that the entire process took.