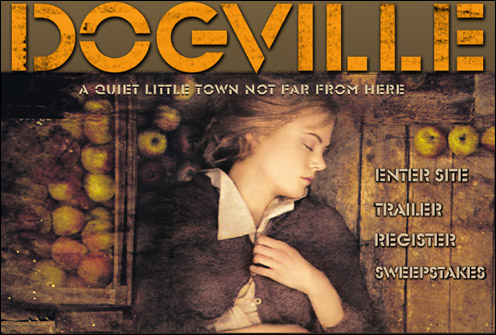 In a recent post about The Stepford Wives, I mentioned this movie, ‘DOGVILLE’, as a much better Nichole Kidman movie to see. It was such a good movie that I though it deserved a posting of it’s own.

anne marie and I saw it a couple of months ago, and it sparked hours of conversation afterwards, at dinner. I would highly recommend this one. Big thumbs up.

This seems to be the week of Apple posts…

Apple is posting images like this one (above) on their home page. The countdown appears to be semi-live actual store sales. I noticed the numbers changing over the course of the morning. That’s cool!

“As we approach the unprecedented milestone of 100 million legally downloaded songs, we want to thank our customers who have made the iTunes Music Store such a stunning success,” said Apple CEO Steve Jobs. “iTunes is pulling even further ahead of its competitors, and it’s all due to the wonderful customers we have.”

When the number of songs downloaded from Apple’s iTunes Music Store crosses 95 million, Apple will begin the countdown to 100 million songs by giving away 50 special 20GB iPods – one to the purchaser of each 100,000th song downloaded between 95 million and 100 million songs. In addition, the person who downloads the 100 millionth song will receive a 17-inch PowerBook, a 40GB iPod, a gift certificate for 10,000 iTunes songs to create the ultimate music library for the iPod and the opportunity to create a Celebrity Playlist to be published on the iTunes Music Store.