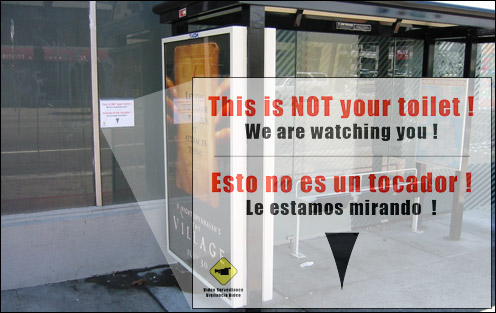 So this is a bus stop near home (4th and Folsom). For some unknown reason, people seem to think this bus stop looks like a toilet. Yes, some of them are bumbs, but I also see relatively average, normal looking people taking a wiz here, in broad daylight, while waiting for a bus.

The other day I was walking Emmitt (my dog) here about noon, and there was a guy who wasn’t even facing the wall, has had his back to the bus stop and was facing me. He was wizzing on the sidewalk. He had his willie in one hand, and actually had the nerve to wave at me, asking for a cigarette, with his other hand as I walked by. I simply looked at him in disgust.

This is apparently happening every day. I don’t always see the people doing it, but there is a constant wet-spot on the sidewalk. I am so disgusted that I felt compelled to put up this sign. I don’t know if it will actually help, but hopefully it will at least discourage the casual wizzer.