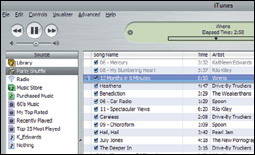 — from PC World’s ‘Best of 2004’
Apple makes Windows apps about as often as Microsoft ships bug-free products, and if iTunes for Windows (free) is any indication, that’s a crying shame. The iTunes media player works on PCs the same way it does on Macs, right down to the handy feature that lets you share your music library with other PC or Mac iTunes users on your network. It looks great, it’s easy to use, and it has a surprising number of useful features, like the abilities to generate rules-based Smart Playlists and to trim individual tracks.

Meanwhile, Apple’s complementary iTunes Music Store (99 cents per track, album prices vary) started the party last year on subscription-free digital tunes, pioneering the 99-cents-per-track model that most online music stores now use. With easy navigation, an impressive exclusive track selection, and such innovative offerings as audiobooks and radio show archives, iTunes Music Store is going strong. Competitors like RealPlayer Music Store made this a tough choice, but it’s hard to beat a store that’s built into the best media player software around. We do have one major complaint: iTunes tracks are incompatible with digital audio players other than Apple’s own IPod. How selfish!