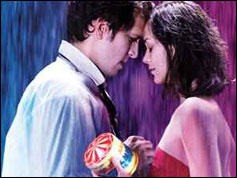 Last night anne marie and I went to see Love Me if You Dare. It’s a French Film (sub-titles) by writer / director Yann Samuell that received rave reviews at the San Francisco Film Festival. I thought parts of it were quite interesting, visually. But I don’t think I would recommend this one. As the movie went on, I cared less and less about what happened to the characters. I actually started to dislike them. Without giving anything away, the ending is confusing to say the least.

3 thoughts on “Love Me if You Dare”